HOTI HOTEIS PRESENTS A REOPENING PLAN AND LAUNCHES THE “WELCOME BACK” PROMOTIONAL CAMPAIGN
Group reopens hotels in a phased way, with 13 hotels in operation as of June 5 “Welcome Back” campaign offers 20% discount in June

The Hoti Hoteis Group, with a portfolio of 18 hotels spread over 9 locations both in Portugal and Mozambique (Maputo), is announcing its strategy to reopen the hotels that have been closed, and is presenting the “Welcome Back” campaign that can be seen in all of its sales channels throughout the month of June.

“Over the last few months, TRYP Lisboa Aeroporto, Star inn Lisbon, Meliá Braga and Hotel da Música have remained operational to provide support to health professionals. Other 9 hotels will resume operations until the next 5 June, thus ensuring the presence of the chain in all of its current locations in mainland Portugal (Braga, Porto, Aveiro, Leiria, Castelo Branco, Peniche, Lisboa, Caparica and Setúbal). Our offer will be reinforced with the 2 hotels in Madeira until the end of June, thus bringing a total of 15 establishments into operation”, according to Miguel Proença, President of the Hoti Hoteis Group.

The entry into service of the new Moxy Lisboa Oriente, as well as the reopening of the Tryp Lisboa Oriente, both located in Parque das Nações, will be dependent upon the development of demand in the Lisbon market, and might occur between July and September. Finally, as far as the Meliá Maputo Sky is concerned, the decision to reopen it will be determined by the development of tourism flows, which suffered a heavy blow in the last few months.

Hoti Hoteis’ 5 own-brand hotels – Star inn Lisbon, Star inn Peniche, Star inn Porto, Hotel da Música and Golden Residence Madeira – are launching the “WELCOME BACK” campaign for reservations made during the month of June and stays taking place until the end of the year. This initiative is available in all of the distribution channels, own channels and all of the B2C and B2B partners, with a 20% discount on current rates, supplemented by special benefits for its guests, which were up until now only available in own channels.

The 12 hotels operated by the Meliá Hotels International chain will take part in the global campaigns to be announced soon. In both cases, booking conditions are highly flexible, by allowing date changes as well as cancellations within 7 days prior to the arrival date.

Having strongly advocated for the certification of sanitary hygiene measures as the first step to rebuild confidence aimed at restoring tourism, Hoti Hotéis Group ensures that all of its hotels comply with high standards of quality, cleanliness and hygiene and will therefore display the “Clean & Safe” seal assigned by Turismo de Portugal (Tourism of Portugal) when operations resume, while also complying with the recommendations from the World Health Organisation (WHO) and the Portuguese General Directorate of Health (DGS, in the Portuguese acronym).

In the case of the Meliá Hotels International brand hotels (Meliá Hotels & Resorts and Tryp by Wyndham), the #StaySafewithMeliá program, a certificate of excellence embraced by hotels of the Hoti Hoteis Group, is being developed in partnership with the Bureau Veritas. 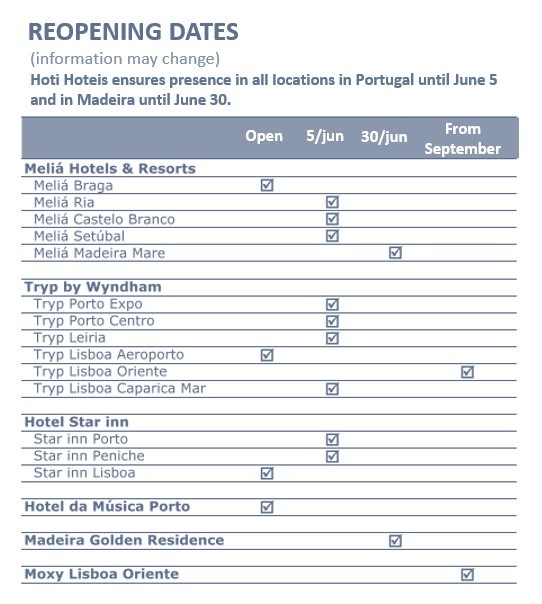